Italian news website La Città Futura has run a story highlighting the important role of Vietnam as a bridge for the strategic partnership between the European Union (EU) and the Association of Southeast Asian Nations (ASEAN,) on the occasion of Prime Minister Pham Minh Chinh’s participation in the ASEAN-EU Summit commemorating the 45th anniversary of their relations.

According to the article, the ASEAN-EU Summit is first high-level event between the two blocks, to be held in Brussels on December 14.

Established in 1977, the ASEAN-EU cooperation has grown steadily in both width and depth, and became a strategic partnership in 2020. With the approval of the Indo-Pacific Strategy announced in 2021, the EU has officially recognised the central role of ASEAN in the region. In terms of economy and trade, in 2021, the EU was ASEAN's third largest partner and second largest supplier of FDI among the grouping’s dialogue partners, it said.

According to the article, with the recent significant progress in bilateral cooperation with the EU in key sectors, Vietnam is becoming an important and effective bridge, contributing to the strengthening of joint cooperation mechanisms between ASEAN and the EU. In particular, the signing of the EU-Vietnam Free Trade Agreement (EVFTA) and its coming into force on 1 August 2020 has created a strong impetus for economic exchanges and trade between the two sides, and is also considered as a model for the EU to continue expanding its engagement across the entire ASEAN region, it held.

The article underlined that despite being affected by the COVID-19 pandemic, the trade turnover between Vietnam and the EU has grown impressively in recent years. Specifically, two-way trade in the first eight months of 2022 reached 42.4 billion USD, an increase of 14.85% compared to the same period of 2021. Vietnam's export structure to the EU tends to expand and diversify. 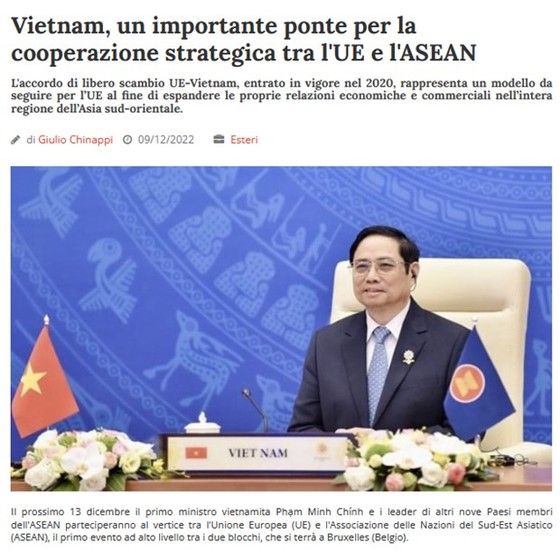 Italian news website La Città Futura runs a story highlighting the important role of Vietnam as a bridge for the strategic partnership between the EU and ASEAN (Photo: screenshot)

In terms of investment, the EU is currently the fifth largest foreign investor in Vietnam, with a total registered capital of 27.6 billion USD. In the first eight months of 2022 alone, the EU's total registered investment capital in Vietnam reached 2.2 billion USD, an increase of 69.6% compared to the same period in 2021. Vietnam has received high-quality investment from the EU with projects using advanced technology, creating common value and benefits for the business communities of both sides.

Along with enhancing economic exchanges and trade, cooperation and experience sharing in climate change response is also a key cooperation area, in which both Vietnam and the EU are interested and promoting. A developing country, yet Vietnam has continued to give a high priority to and been determined to successfully implement the commitments announced at the 26th UN Climate Change Conference (COP26) and achieve the net-zero emission goal in 2050, it noted.

Along with that, Vietnam and the EU are actively implementing cooperation initiatives on green energy and sustainable energy. In particular, with the coordination of the UN and the EU, Vietnam has established the Just Energy Transformation Partnership (JETP) with the group of the most industrialised countries in the world (G7). The Vietnamese side has contributed politically and technically to the implementation of this initiative, it added.

For Vietnam, the issue of energy conversion is of great importance for the successful implementation of the National Socio-Economic Development Strategy. Vietnam calls on the EU to support the building of self-sufficiency in the production of renewable energy conversion equipment, support access to preferential green finance, and enhance technological transformation.

Within the region, Vietnam and the EU aim to coordinate and expand cooperation in other important areas, at a time when many important EU strategies have just been announced, such as the cooperation strategy with the Indo- peace, the Global Gateway, and the strategic compass, demonstrating the remarkable role of the ASEAN region and Asia in general, said the article.

Government determined to strengthen and stabilize the market

Vietnamese business sues Amazon in US

Vietnam is one of potential markets for branded residences

Government determined to strengthen and stabilize the market