Major apparel makers are halting or slowing their expansion in Vietnam amid worries that the trade war will indirectly push up labor costs as tech giants like Apple seek to shift production out of China.

For many of these companies -- who supply some of the biggest brands in the world, including Nike, Adidas, Uniqlo and H&M -- Vietnam is their biggest manufacturing base. But as Apple, Dell, Google and Amazon suppliers seek new production locations to avoid U.S. tariffs on China, competition for land and local talent is expected to heat up.

Makalot Industrial, a leading clothing producer for GAP, Walmart, Zara, and H&M, has said it will slow its expansion plans in Vietnam.

"More and more companies come to Vietnam ... In the foreseeable future, we do foresee a shortage of labors and even fierce competitions in hiring staff there," Makalot Chairman and CEO Frank Chou told the Nikkei Asian Review. For the apparel industry specifically, the best time to invest in Vietnam may have passed, Chou said, and companies will have to adjust to a tougher environment.

Vietnam is Makalot's largest production base, accounting for 37% of its capacity. But Chou said the company will now focus on expanding more aggressively in Indonesia, which he expects to become Makalot's most significant production base in three to five years.

Eclat Textile, Taiwan's largest sportswear supplier whose clients include Nike, Under Armour and Lululemon, will stop expanding in Vietnam, Vice President Roger Lo told the Nikkei Asian Review. Lo said the company will look elsewhere for future expansion, but did not specify where.

"From this year, we will not add capacity to our Vietnam site and we are still looking for other countries to make further investments," he said. Currently, most of Eclat's production is located in Taiwan and Vietnam.

Thanks to its population of 95 million and its geographical proximity to the world's second-largest economy, Vietnam has long been a popular destination for textile and shoemaking companies hoping to seek lower production cost and a young workforce outside of China. Makalot currently only has 4% of production left in China, while Eclat Textile closed down its last Chinese factory by the end of 2016. Pou Chen, the world's largest contract footwear maker, has also scaled back its Chinese manufacturing over the years, from 29% in 2014 to 13% in the first quarter of 2019 in terms of total shipments.

However, the minimum wage in Vietnam has risen over the last 10 years from 1 million Vietnamese dong ($43) a month to 4.18 million dong per month in 2019, according to the government, although this is still lower than China. The Vietnamese government also requires all manufacturers to raise wages by more than 10% each year. Most foreign companies already offer much higher than the base pay, while the total compensation package should also include insurance as well as other employee benefits and bonuses. 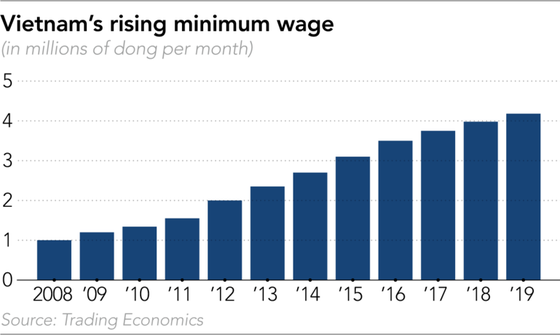 Despite rising labor costs, Vietnam has been one of the beneficiaries since trade war between the world's two largest economies began. The Southeast Asian nation's exports to the U.S. increased 38% on the year in the first four months of 2019, and more tech companies like Apple, Dell, Google and Amazon are considering shifting to the country to avoid the tariffs.

But the production shift from China to Vietnam could make the country the next target for U.S. President Donald Trump, as he hinted last Wednesday that he might impose tariffs on Vietnamese goods. "A lot of companies are moving to Vietnam, but Vietnam takes advantage of us even worse than China. So there's a very interesting situation going on there," Trump said during an interview with Fox Business.

Ethan Harris, head of global economics at Bank of America Merrill Lynch, said there is a "high risk" that the U.S. will target Vietnam with tariffs.

“I would say the number one target will be Vietnam,” Harris told reporters during a Tuesday conference call, citing "a very rapidly growing bilateral surplus" along with factors such as the country's communist rule, state-directed credit and managed currency trade.

Helen Qiao, chief greater China economist and head of Asia Pacific economies at the bank, downplayed the notion of a rapid manufacturing exodus from China, citing constraints in other Asian economies.

Nevertheless, a spokesperson for Pou Chen, the sports footwear empire behind Nike, Adidas and most other famous international brands, told Nikkei that the cost of land in Vietnam is rising every year and shows no signs of turning back. "For the long run, we don't think there is much room left for our Vietnam capacity and employees there to continue to grow."

For all 2018, Pou Chen produced 46% of its total 326 million pairs of shoes in Vietnam, its largest manufacturing base. That figure fell to 43% for the January-March period in 2019. In Indonesia, production rose from 37% last year to 41% for the first quarter this year.

Simply shifting production, however, is not the answer, according to the spokesperson.

"It does not mean we need to definitely move to somewhere else beyond Vietnam, which is not realistic, but it means we have to transform ourselves with automation to reduce labor uses in the long run to stay competitive. We will also adjust our capacity flexibly."

An executive at another Taiwanese shoe manufacturer, which has been investing in Vietnam for more than 20 years, voiced a similar opinion.

"We are indeed a bit worried that all those tech companies coming to Vietnam could increase recruitment costs and make it hard for us to recruit labors, but you can't always look for countries with cheaper wages as solutions."

The executive said his company is aware that many companies from traditional sectors are looking at Cambodia, Indonesia and other lower-wage countries outside of Vietnam. However, the overall labor quality, working efficiency and infrastructure in Vietnam are still competitive for the shoemaking industry despite labor costs rising by at least 10% annually, per regulations. "The costs are rising. But we could invest in automation, better management to increase production efficiency. It is not easy to find efficient workers elsewhere."

Simon Shen, president of New Kinpo Group, a supplier of Dyson, Casio and HP, told Nikkei that Vietnam's current population simply cannot accommodate a massive production shift from China. "It's a bit overheated in Vietnam," Shen said. "U.S. President Trump also hinted that he is considering imposing tariffs on Vietnam. Companies that are betting big there may need to think twice." New Kinpo Group has manufacturing sites in the Philippines, Thailand, Brazil and China.

"Companies in traditional industries will be squeezed as tech companies are also heading to Vietnam," said Karen Ma, an analyst specializing in emerging markets at Hsinchu-based Industrial Technology Research Institute. "Meanwhile, the cost of expansion there will definitely become much more expansive. ... Most of these existing players in the textile and footwear industry will face a dilemma: Where should they go if they are leaving Vietnam? Currently, there are not many choices for them left in the region as Laos and Indonesia have not yet reached Vietnam's level in terms of infrastructure and quality of the workforce."