Huawei Technologies will have to find new suppliers for 15 of the higher value parts of its flagship handset now that Washington has barred U.S. companies from doing business with the Chinese tech giant. Click here to see an in-depth image of the anatomy of Huawei's latest model.

And Apple will be gravely affected if Washington puts a fourth round of additional tariffs on Chinese products into effect; the U.S. technology brand produces most of its smartphones in China.

The risk is that if today's supply chain splinters and gives rise to higher costs, the huge market for smartphones and a host of related products could stagnate as final consumer prices explode.

A breakdown of Huawei's P30 Pro, the company's newest handset, shows that while U.S. content accounts for 1% of the parts, those components add up to roughly 16% of the cost of all components. In addition, 62% of the phone's parts in terms of cost were produced by companies outside China, according to Fomalhaut Techno Solutions, a Tokyo research outfit.

The U.S. parts include communication semiconductors from Qorvo, the North Carolina-based chipmaker, and cover glass from Corning, a New York technology materials group.

Only a few months ago Huawei was aiming to become the world's largest smartphone maker by 2020. However, it has had to give up that ambition in the face of an intensifying trade war between China and the U.S. The battle is starving Huawei's newest smartphones of key components and software, such as Google's Android operating system and Facebook apps.

In fact, Huawei Technologies earlier this month slashed its sales expectations for the next two years by $30 billion, setting forecasts at roughly $100 billion in 2020. Huawei founder and CEO Ren Zhengfei admitted that constraints imposed on the company's U.S. suppliers by the Donald Trump Administration had taken a heavy toll on the group.

Huawei has reportedly stocked up on parts but -- when its inventories dry up -- the company will have to find alternative sources. This could prove difficult, however, as many international companies use U.S. technology and find themselves bound by the U.S. constraints. The challenge will be to find independent suppliers of equivalent quality.

Meanwhile, President Trump's threat to impose a fourth round of tariffs on Chinese goods is stoking fears that the global smartphone supply chain -- which has prospered due to free trade -- could be broken up.

U.S. companies could also suffer if that global network breaks down.

The smartphone displayed below is the result of a horizontal assembly process that spans the globe and brings a kind of mutual reliance to companies in the U.S., China, Japan, South Korea, Taiwan and other republics. The U.S. ban is forcing not just Huawei but other companies in this complex web to review their business strategies.

Like Huawei, new tariffs would pose a problem for Apple. A fourth round of tariffs could hit plans for the traditional autumn launch of new iPhones.

The iPhone XS Max, Apple's costliest series of handsets, depends on Chinese suppliers for parts accounting for less than 1% of the total cost. But, as it assembles the vast majority of its phones in China, Washington's threat to impose additional tariffs of up to 25% could lead to significantly higher prices. Consumers could have to pay around $1,160 for the least expensive XS against $999 currently, according to Morgan Stanley.

Apple in 2018 sourced from 41 companies in China and Hong Kong, contracting them to assemble iPhones or to supply materials. Only Taiwan was home to more iPhone suppliers. In terms of cost, about 70% of the phone's parts were produced by companies outside the U.S., according to Fomalhaut Techno Solutions.

But with that potential 25% tax looming, Apple needs to either find new assemblers or keep its existing partners and learn to cope with the tariffs.

Apple has asked its major suppliers to evaluate the cost implications of shifting 15% to 30% of their production from China to Southeast Asia as it prepares for a fundamental restructuring of its supply chain, the Nikkei Asian Review has learned.

Sanctions under the U.S. National Defense Authorization Act that are hitting Huawei and four other Chinese companies could set off a cascade of repercussions. If sales in the U.S., Europe and Japan are wiped out, major industries in the U.S., China, Japan, South Korea and Taiwan would be forced to halt $103 billion worth of production, according to an estimate by the Japan Center for Economic Research. China would account for 90% of the decline.

Beijing is not ignoring Washington's tariff offensive. China this month revealed a plan to toughen export controls of rare earths, which are indispensable to the production of the batteries in smartphones, electric vehicles and a host of other consumer products. 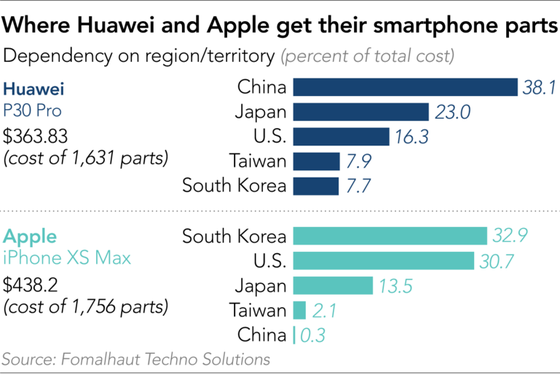 If the plan is executed, a broad swath of corporate America will feel the impact.

The supply chain is already under pressure as the smartphone industry suffers from several years of decline. Smartphone sales have been falling since 2016, according to U.S. research company IDC. Globally, about 1.4 billion smartphones were sold last year.

The market's vast size has pushed component makers to achieve scale by supplying customers around the globe. South Korea's Samsung Electronics, which makes chips and displays as well as being the world's largest smartphone maker, is one corporation that has been able to leverage the scale of the market to bring down the cost of manufacturing high-performance components.

The ubiquity of smartphones has also allowed app and service economies to thrive.

Now this is all on the line as China and the U.S. trade economic blows, forcing the industry's heavyweights to consider relocating factories and bringing parts production in house.