Almost 400 days since the first day the U.S officially launched tariffs on China's goods on July 6, 2018 to exploit the trade war, there is no significant agreement to be signed. But the world is generally clearer about the trade dispute's driving forces, motivations, its strategic approaches, expected outcomes of each side, and at least clearer understanding goals of the Trump's administration.

In contrast to hasty assessments given at the beginning of the trade dispute, the United States has no aspirations to become a closed economy, nor is it a reverse factor of the globalization process. With the exception of intellectual property-related issues, the U.S negotiation’s toughness always becomes more flexible whenever the China makes commitments to increase in importing more of U.S goods. For example, on January 30-31, 2019, the 209th - 210th day of the trade war timeline, when China made a commitment to import more of US goods, which in details was to buy 5 million tons of the U.S soybeans. President Trump right away proposed to have a face to face meeting with President Xi in February 2019, which promising many further positive changes. Earlier, in May 20th of 2018, the period in which the trade war was only at a threatening level, the U.S also showed signs that it would not deploy the trade war to respond to China's promise to increase purchases of American goods.

Thus, in addition to issues of national security, intellectual property, etc. Americans obviously wish to adjust their trade balances with other countries through the requirement of their partners to increase purchasing the U.S goods and services. The trade balance of a particular country, which is also called as the net exports, is the difference between the value of goods and services that the country exports to other countries minus the value of that imported to domestic market. Therefore, solving the deficit in the U.S trade balance by requiring the world to increase purchasing of goods and services produced in the U.S is a clearly logic solution. Great purchasing power of American makes this market always important to every country. Objectively, the U.S seems to be always in the upper hand in all negotiations it takes, similar to the fact that a customer with the greatest purchasing power of a certain business clearly important to the success of that business, because losing that biggest customer would put the business in a position to face with a significant loss in revenue.

The Trump government wants to reduce unemployment for the U.S labor force. But apparently that increasing the purchase of U.S goods is an aspiration, or a truce in term of preventing trade war with the U.S recently. And all those countries that the U.S is having the imbalance trade will in turn to be invited for negotiation and settlement in the coming time. This is quite obvious no matter whether President Trump continues to be elected at the next term president or not, the successor of the White House, whoever no matter what, is highly likely to continue this orientation due to the strategic correctness, that aiming to create markets for the U.S produced goods and services, and of course to create more jobs in the United States.

The latest data on the U.S-Vietnam trade balance shows that the U.S is increasingly trading deficits for Vietnam. In the recent period, when the trade tension between the U.S and many other countries takes place, Vietnam continues to grow in term of exporting of goods to the U.S market. In the first five months of 2019, the U.S exported to Vietnam a volume of goods worth about US $ 4.2 billion, while importing from Vietnam to the U.S was 25.8 billion, hence the trade balance was deficit with the value about 21.5 billion dollars. This much of deficit considered to be a quite high figure in comparison to the total value of deficit of 2018, which was US $ 39.4 billion. The following table is the data of the U.S -Vietnam trade balance of each of the first five months of the year 2019: 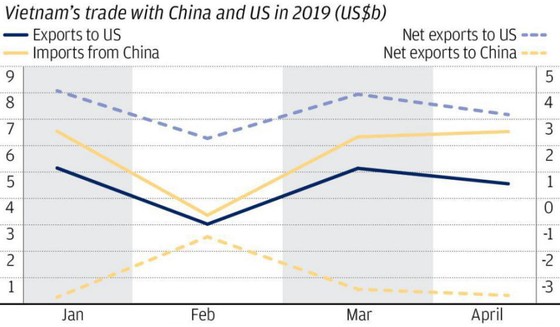 Source: Data from Vietnam Statistical Office, posted on Chinese media under the analysis of Chinese expert Xie Yu. Unit: Billions of USD
In addition to the growing deficit in the trade balance, Vietnam is in risk of being targeted to be soon invited to join the negotiation table with the US government, because of the Vietnam's goods have many ambiguous characteristics with Chinese goods. Trade tension has now reached Canada, Mexico, the European countries and so on. But China is always at the central of the trade tension because of many reasons, which one of those for sure is the excess of trade deficit.

China’s media has also participated in outlining the origin of Vietnam's and China's goods. The chart below shows the volume of Vietnam goods exported to the United States, and the volume of Vietnam goods imported from China, they are coincidently showing a tight correlation. Xie Yu, a Chinese expert, boldly made a comment on the SCMP newspaper that many of Vietnam's export goods were to re-export Chinese goods to avoid the tariffs of the Trump administration and "For such business, there was no value generated in Vietnam".

And if the risk is potential obviously that the U.S might soon proceed to adjust the trade balance with Vietnam, it is clear that we should proactively respond, rather than just wait for it to happen. Looking back on what have been happening in the China since the first day of the trade war would help to learn may important lessons. For instant: the capital market's evaporation, the reducing in size of the market of both direct and indirect investment capital inflows, breaking supply chains and so forth. An example with the most easy-to-visualize is the Shanghai Composite index, compared to its previous peak before the trade war started, it has lost approximately about 50% of the value. In the worst days, there was a period of panic among investors that the Chinese government had to close the stock market. Hence, these risks will bring negative consequences if the trade war happens, rather than simply losing the U.S export market for Vietnam goods and services.

In considering the increase in imports as a solution, it means that the choice is to maintain the U.S market for Vietnam's export goods avoids the risk of trade tention. The first thing to examine is the current situation of importing goods and services from the U.S to Vietnam. For the tastes of Vietnamese consumers, American origin goods have long been favored, somewhat even more favored than both Japanese and German goods. Many overseas Vietnamese people are living in the United States, thus has made export from U.S to Vietnam through "portable" way be quite popular. If this amount of goods is recorded by the Department of Statistics successfully, it is possible that the U.S-Vietnam trade balance will not be as much deficient as it is today. In fact, Vietnamese people have been buying a lot of goods from the U.S, mainly due to Vietnamese consumers' taste. In order to solve the problem of trade tension's risks, it may be necessary to formalize the distribution channel of goods that imported from the U.S to replace for the "portable" transactions way.

Source: U.S Census Bureau. All figures are in millions of U.S dollars
In 2018, U.S is the largest importer  of Vietnam goods, accounting for 19% of total exports. Hence, the U.S market is important to Vietnam's net exports’ growth. However, when other factors remain unchanged, the demand for goods of a particular country cannot naturally increase or decrease for a group of goods originating from a certain country. Therefore, in order to increase the purchase of goods to proactively balance the U.S and Vietnam trade relations, it may be necessary to consider the trade-off between strategic partners and sub-partners.

A great milestone of Vietnam's international trade relations in 2019 could be the EVFTA agreement. In the 10-year roadmap reducing tax barriers between Vietnam and the EU countries, all tariffs seem to be completely lifted, some industries will have imports’ tariffs of zero percent. It is clear that in the future, European countries are also important strategic partners in terms of Vietnam's trade balance.

In order to adjust the balance and prevent trade tenstion with the U.S, Vietnam may consider shifting its partner counterpart, which means reducing imports for sub-partners, focusing on purchasing power for the strategic partners.

For example, in the case of the UK, a country that is leaving the EU, Brexit makes England become an outsider of the EVFTA agreement framework, this is a case that Vietnam may consider to forgo in term of U.K. as a potential market to import products. A report analyzing EVFTA's influences on the U.K. said that, if the country did not leave the European Union, the purchasing power of goods originating from the UK by 2030 from Vietnamese people would reach 486 million pounds, equivalent to about 591 million US dollars. Now when the UK is an outsider of the EVFTA agreement, and if the government policies can shift the demand for goods that Vietnamese potential buy that from the U.K. market to the U.S, the problem of balancing the trade balance for America may also be feasible.

This trade-off, anyway, not also helps Vietnam to keep its major export market, which is the U.S, but also helps the country to avoid other risks that may bring many negative consequences. For example, the Vietnam stock exchange market has the potential to be upgraded ranking from a frontier market to a secondary emerging market in a not far future, hence, the flows of indirect investment are quietly pouring into the Vietnamese market. And at the same time, Vietnam is the hot destination of foreign businesses which are leaving China due to the trade war tenstions.