The government of Pakistan has ordered the resumption of all infrastructure and energy projects that are part of China's Belt and Road Initiative, but experts believe the move is a matter of face-saving.

Work on the China-Pakistan Economic Corridor, a major piece of the Belt and Road, stopped when the novel coronavirus started to spread in Pakistan in February. According to Johns Hopkins University data, Pakistan has confirmed 9,216 cases as of Tuesday, including 192 deaths.

Naghmana Hashmi, Pakistan's ambassador in Beijing, told Pakistani media on Sunday that a number of mechanisms have been established to complete all corridor projects within the prescribed time frame. But analysts say restarting the projects at the height of the pandemic is meant to spare Beijing and Islamabad embarrassment.

Michael Kugelman, deputy director of the Asia program at the Washington-based Wilson Center, believes that resumption of the projects sends a "business as usual" message about an effort that both countries see as crucial. Kugelman told the Nikkei Asian Review that the decision comes even as Pakistan tries to limit its exposure to outside the world. And with fears of a possible second wave of the coronavirus in China, there is a compelling public health rationale for slowing things down.

Malik Siraj Akbar, a Washington-based South Asia analyst, believes China and Pakistan may resume work on corridor projects as a public relations exercise to show the world the strength of their relationship and commitment to the infrastructure-building drive, even during challenging times.

Akbar added that it would make sense to halt the projects due to COVID-19. Postponing the work would be a positive gesture to the Pakistani public demonstrating the commitment of Prime Minister Imran Khan's government to people's health, rather than to an economic development effort that can wait. 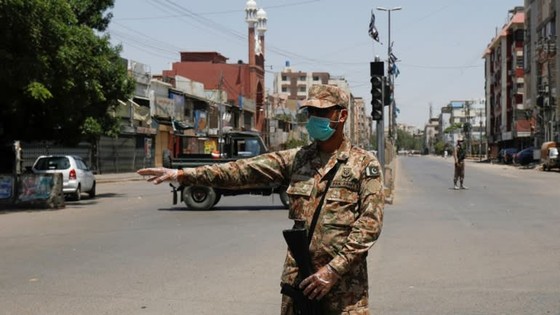 A Pakistani soldier directs traffic on a largely deserted road in Karachi on April 17. The government has called a halt to most economic activity to slow the spread of the coronavirus.   © Reuters

The global economic slowdown triggered by the coronavirus has also impacted Pakistan, with some experts putting the cost as high as $15.29 billion. In order to finance its economic shortfalls and battle the virus, Pakistan secured a $1.39 billion disbursement from the International Monetary Fund under the fund's Rapid Financing Instrument.

Amid the economic crisis, some have questioned the economic viability of Belt and Road projects. According to the Planning Commission of Pakistan, the country's top development planning body, Chinese skilled laborers are paid 1,300% more than Pakistani laborers for the Main Line 1 (ML-1) railway project, a discrepancy it says must be rationalized.

The commission has also asked Pakistan Railways to evaluate the impact of a huge Chinese loan of almost $9 billion for the ML-1, which is the single largest infrastructure project for the corridor in the country. Pakistan expects 90% of the funding for the ML-1 to come from the Chinese loan. The commission fears the terms may saddle the country with heavy debt if it is not looked into now.

On the other hand, there are bullish voices who say that resuming Belt and Road projects is worth the risk.

Hasaan Khawar, a public policy analyst based in Islamabad, believes the corridor's special economic zones can help Pakistan solve its economic woes. "The world is changing fast, and it will be a different place by the time the pandemic is over. Investment flows will shrink, and China will be one of the very few countries with available capital," Khawar said. He added that the corridor and the zones provide a ready framework for Pakistan to attract Chinese capital and should, therefore, be a priority for Pakistan.

Malik believes that the aftermath of the COVID-19 crisis will leave China better positioned as a global power and savior of a world in deep crisis. After this, the world will see a continuation and expansion of Belt and Road projects, he says.

Kugelman sees the corridor as the most concrete and active part of the Belt and Road and says its trajectory will be shaped to a great extent by how the corridor develops. He adds that if corridor projects are put on hold until the pandemic has ended, the Belt and Road as a whole could take a pause. If they move ahead, that portends more forward movement for the initiative in the near future, Kugelman says.