On the evening of July 7, the first concert night of the art program "Cai luong - Hundred years of origin", the auditorium of Ben Thanh Theater (Ho Chi Minh City) was not filled with audiences, though, we could see excitement and happiness on everyone's face. Among the hundreds of spectators who came to the program, there were white-headed grandparents, but many of the audience were very young, and even many children followed their grandparents and parents to watch the program. We also saw foreign guests. Despite they counldn't understand Vietnamese, but they listened attentively and swayed to the music.

Hoang Son Giang, a graduate student of Cultural University, commented: “The program was elaborately staged. The excerpts and performances were carefully chosen. The lines in the plays had brought me to my childhood. The host of the program is quite charming, witty, provoking, and could provide standard knowledge so that the audience could understand more about cai luong”. 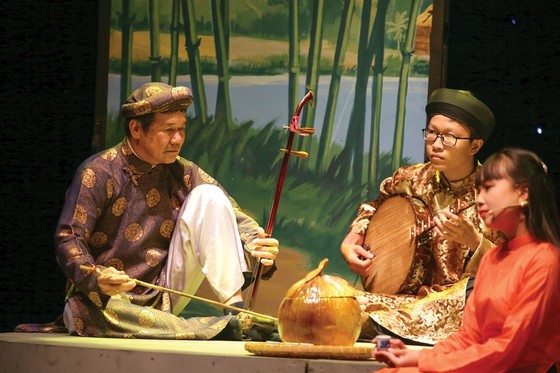 Board of musicians and Merited Artist Huynh Khai (left). Photo: Hoang Hung
As said by Nguyen Vu Dan Vi, Green Horizon Deputy General Director and representative of the producer and copyright holder of the program, the 2 hours concert night could not fully introduce the essence of cai luong, but it could contribute to the artistic stage a good work, so that the audience, especially the young audience, could understand and love this traditional art.

With the same view, director Quang Thao shared that although the concert night could not tell a complete story, it had done an important job: Showing the typical traits of cai luong history. "More than 100 minutes, though not complete, but it could show the journey of cai luong", he emphasized.

Bring audiences into the program

Referring to the precursor of cai luong, people cannot forget the "ca ra bo" through the excerpt of Bui Kiem - Nguyet Nga (Truong Duy Toan). And we must remember the standard version of "Da co hoai lang" by composer Cao Van Lau. Prof. Dr. Tran Van Khe had said that Da co hoai lang "was transformed from an individual work to a community work. From the beginning of the century, it grown up strongly, transformed to thousands of works, and would live forever in the hearts of Vietnamese people all over the world".

“I stood watching the audience for more than 100 minutes and noticed, no one took their eyes off the stage. They focused on enjoying and sublimating emotions with the performer. The program may not be completely outstanding, but I believe it has been able to make a bridge between the audience with cai luong art", said director Quang Thao.
The special highlight of the program is 2 excerpts from "Doi co Luu" (Ms. Luu's life, by Tran Huu Trang) and "Xu an Thuong Duong" (A court in Thuong Duong, by Thanh Tong), with the new lyric writing by People's Artist Bach Tuyet and director Quang Thao.

Talking about the new features of the works performed in the program, Dan Vi said she wanted them to include more human and sympathetic views of young people in the 21st century: "After all, art is to make people more sympathetic, love each other and more good-hearted”.

On the first night of the concert, the appearance of the special guest - artist Vu Linh - and the song Han Mac Tu cheered the audience. Despite just recovered from a serious illness, the talented artist still captivated people with every word he sung.

After making people cry with “Doi co Luu”, People's artist Bach Tuyet brought a lot of laughter to the auditorium with her humor, wit and profound knowledge of cai luong. Bach Tuyet was also the artistic advisor of the show.

The audience could also watch some video excerpts of the life of People's Artist Phung Ha, author Cao Van Lau... These two people had contributed significantly in the art of cai luong. They were the ones who had spent their whole lives for cai luong art.

In the 100-year journey of cai luong, the question of how to reach the youth is always a challenge. From the perspective of a young person, who is working on a master's thesis on a cai luong topic, Son Giang admited a large part of young people were turning their back to cai luong.

“If I hadn’t had opportunities to watch or listen to cai luong from a child, I would not be interested in cai luong. Besides, in the technology era as nowadays, there are so many types of entertainment with high interaction which we can sit at home can enjoy”, said Giang.

Recognizing the current young audience is quite indifferent to cai luong and that is a sad reality, but director Quang Thao is not completely pessimistic. According to him, if there was a right approach, if knowing what young people need and want, we could cultivate the germs and buds so that they would bloom one day.

Ms. Dan Vi is also optimistic: “Looking at the experience of developed countries, we believe in the more modern society with many opportunities to approach different cultures, the need to find national cultural identity is real. Our responsibility is to inspire people to find their roots and have the opportunity to experience those good cultural values.”

“The goal of the program is to help the audience, especially the young people, to understand more, love and interested in cai luong. They are the ones who can make cai luong alive”, said Nguyen Vu Dan Vi, Green Horizon Deputy General Director.

It is known that in order to reach young audiences, the program offered pupils and students preferential tickets. In the first concert night, these tickets had been sold out. Besides, team also wishes to cooperate with partners to bring the program closer to students of high schools and universities.

The journey of “Cai Luong - Hundred years of origin” has just begun. It is impossible to say that the program is perfect, but the initial achievements are the motivation for the team to be more confident on the journey of bringing cai luong closer to the audience.

“Although nowadays, cai luong drama is no longer performed, but in our memory, there are always an art which is the pride of the nation and famous all over the world. Hopefully, young people will always dare to do so that cai luong will live 150 or 200 years more. If you are afraid, cai luong cannot exist", said director Quang Thao.

Love and dare to do

The art program “Cai luong - Hundred years of origin” is produced by JSC Green Horizon - a unit operating in many fields with the function of building and organizing cultural activities. It aims to both preserving the tradition and promoting creativity and innovation, while preserving cultural identity. 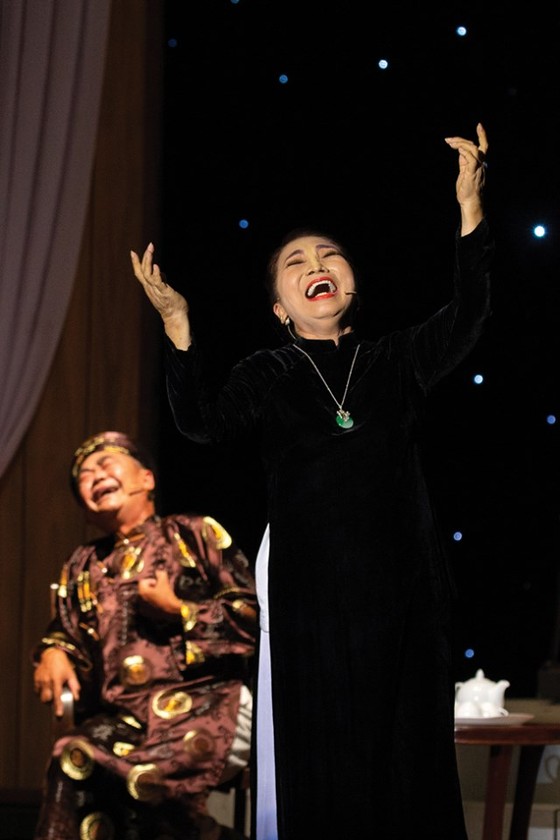 People's Artist Bach Tuyet in the excerpt from the story of “Đời cô Lựu”. (Photo: Hoang Hung)
The focus of the company is to inspire people to look at our root, to experience the good traditional cultural values, especially for the younger generation born and raised in Ho Chi Minh City.

In fact, Green Horizon not only works on cai luong but also has many cultural projects that have been implemented, such as the publishing project of “Sài Gòn - Gìn vàng giữ ngọc”, Sài Gòn của em”… According to Ms. Dan Vi, Green Horizon's goal is to organize cultural activities that are both to preserve traditional values and to attract young people, because the youth are the ones who will preserve the cultural and artistic values.

“If we only think about the immediate profit, we will not pursue the model of building and organizing cultural activities. We strive to produce quality cultural products that meet the increasing demand of the public. We also hope that more and more units will accompany us, share with us, so that we will have more and more diverse and interesting cultural activities”, said Ms. Dan Vi.