Bangkok's streets have been painted yellow and red by delivery trucks and motorcycles from Flash Express and Best Express lately, thanks to booming online trade that has resulted in fierce competition between logistics companies, and has also drawn in global players like Alibaba Group Holding.

More than two million parcels are dropped at logistics warehouses across Southeast Asia's second largest economy every day, as Thais embrace online shopping. Ministry of Commerce data showed that there were 1,340 logistics companies in Thailand last year, up from 1,151 in 2017 and 830 in 2016.

Of the new players, some 80% are foreign companies that have bulging war chests and cutting-edge technology that smaller local peers are finding hard to compete with.

Flash Express and Best Express have so far emerged as the strongest contenders, both backed by Alibaba. Flash Express was launched in 2018 after having raised 2.5 billion baht ($81.6 million). In June, it raised another 2.5 billion baht in a second round of fundraising in which Alibaba invested 1 billion baht, according to Chalie Tansiri, senior adviser at the company.

"Alibaba expanded into Thailand to strengthen its e-commerce platform [outside China], and Alibaba's investment in our company helps strengthen in expanding our customer base," said Chalie. "It's a win-win situation that will eventually benefit Thai consumers." 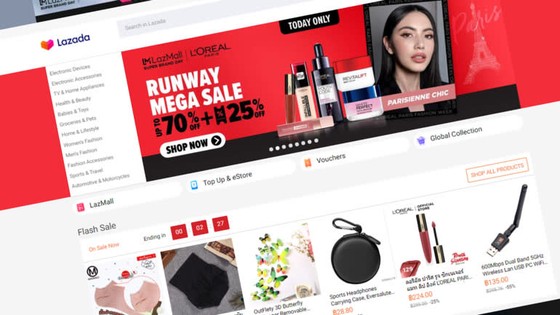 Flash Express made a shocking entry to the market by offering delivery fees as low as 19 baht (62 cents) per parcel, far cheaper than an industry average of 60 baht, as it strove to capture market share. CEO Komsan Lee said he expects a shortfall of 600 million baht this year, calculated as the difference between fees the company charges and its costs.

Komsan declined to say how much more the company is will to spend on expanding its market share, only that competitive pricing would bring in more customers. Flash Express hopes to be delivering 100,000 parcels every day by the end of the year, doubling from the current 50,000.

Flash Express has already set up 1,100 delivery points nationwide but hopes to nearly double the number to 2,000 by the end of this year. With 2,000 delivery points, the two-year-old startup will have a delivery network of about a quarter that of Thailand Post which has been around for 136 years.

Another area that Flash Express is investing in is technology. Flash Express claims that as many as 100,000 parcels can be handled in one minute by fully automated sorting systems at its main warehouse. The weight and destination of every parcel are stored so that the system can analyze the patterns of goods flow.

The Thai e-commerce sector grew to 3.2 trillion baht in 2018, up 14% from the previous year, the fastest growth rate among major countries in the region, according to Thailand's Electronic Transactions Development Agency. That pushed the value of the logistics market as a whole to 200 billion baht in the year, according to the Thai Transportation and Logistics Association. 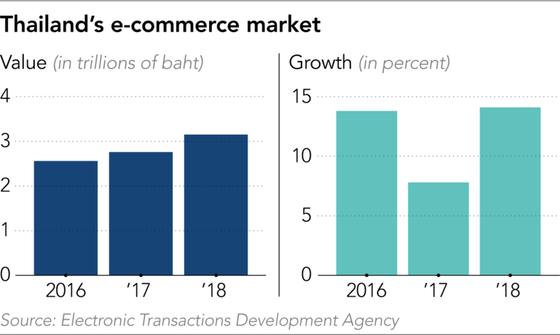 Even newer to the market is Best Express which is backed by New York Stock Exchange-listed Best Inc. and Alibaba. Best Express entered the Thai market in January with backing of five billion baht.

In May, the company announced that it would expand its business rapidly by offering franchises. It hopes to have more than 100 franchisees with more than 2,000 service stations by next year, up from the current 500 stations.

"I like that Best Express holds new promotions with lower delivery fees, and sometimes holds quizzes or games via Facebook that we can play and get some premium gifts," said Dujduen Saeng-arun, a client. "Such promotions make me choose Best Express when I want to deliver goods."

Global logistics giant DHL is also trying to capitalize on the e-commerce boom in Thailand. In November, its local unit announced that it would provide logistics services for JD Central, a joint venture between Central Group, Thailand's biggest retailer and JD.com, China's major e-commerce platform.

"Most Thai local logistics companies are still run as family businesses and it is very difficult for them to adjust by investing a lot in technology," said Chumpol Saichuer, president of TTLA.

"Traditional logistics companies like us are about to be disrupted," said Sunyawit Sethapokin, managing director of Blue & White Logistics. "We have to invest a lot in new things, particularly technology. That has made some of those who do not have strong financial liquidity have to go out of business," said Sunyawit, the second-generation head of the more than 30-year-old family owned business.

In the case of Blue & White, the company is focusing less on the cutthroat business-to-consumer segment and putting more effort into business-to-business operations. "There is still room to make a profit, as the competition in the segment is not as fierce as B-to-C," said Sunyawit.

Disruption was at work when Flash Express bought a majority stake in Nim Express, a 30-year-old logistics company, for 200 million baht to gain access to its network. Some industry observers said this was one way that older companies can survive in the current climate.

"Everyone realizes that what they need is technology and the way to get better technology is to seek partners," said an analyst at Kasikorn Research Center.

Thailand's largest producer of construction materials Siam Cement Group overcame technical and know-how issues by partnering with Japanese logistics giant Yamato Holdings when it entered the home delivery business in July 2017. Both set up a joint venture, SCG Yamato Express, with a registered capital of 633 million baht. Siam Cement holds a 65% stake in the company.

SCG Yamato's niche is the delivery of cold and frozen foods. The company expanded its service centers to 100 points across the country last year.

"Thailand Post still lacks the flexibility and technology and the company needs to adjust itself a lot," said the analyst at Kasikorn Research.

Thailand Post spent four billion baht to upgrade its service by developing a new logistics center in Ayuthaya province that is equipped with the latest sorting technologies to help cut delivery time and costs. But it is still falling short of its own revenue targets due to the fierce competition.

"Although we have the biggest market share, we need to admit that we still lack modernized IT systems compared with other private companies," Smorn Terdthampiboon, president of Thailand Post, was quoted as saying in local media in May. "Moreover, we are a state-owned company with deliberative bureaucracy that makes it hard for us to adjust anything [quickly]."

Other smaller players have turned to the government as a last resort. Chumpol said the association had sent a petition to the Office of Trade Competition Commission last month, asking the government to erect measures to protect them.

"We are pointing out that there is an unfair game, particularly the way that a company is cutting prices sharply and unfairly to attract clients," said Chumpol. "It is about to force many local companies out of business."

But so far, the commission is unwilling to meddle in what are considered to be free and fair market practices.

"We must understand that competition normally brings in price cuts and we can't deny that it's to the benefit of consumers. That is the basic rule," said Commissioner Sakon Varunyuwatana. "If companies are trying to cut costs and prices to gain bigger market share, it does not hurt anybody and we would allow them to continue to compete without any intervention."